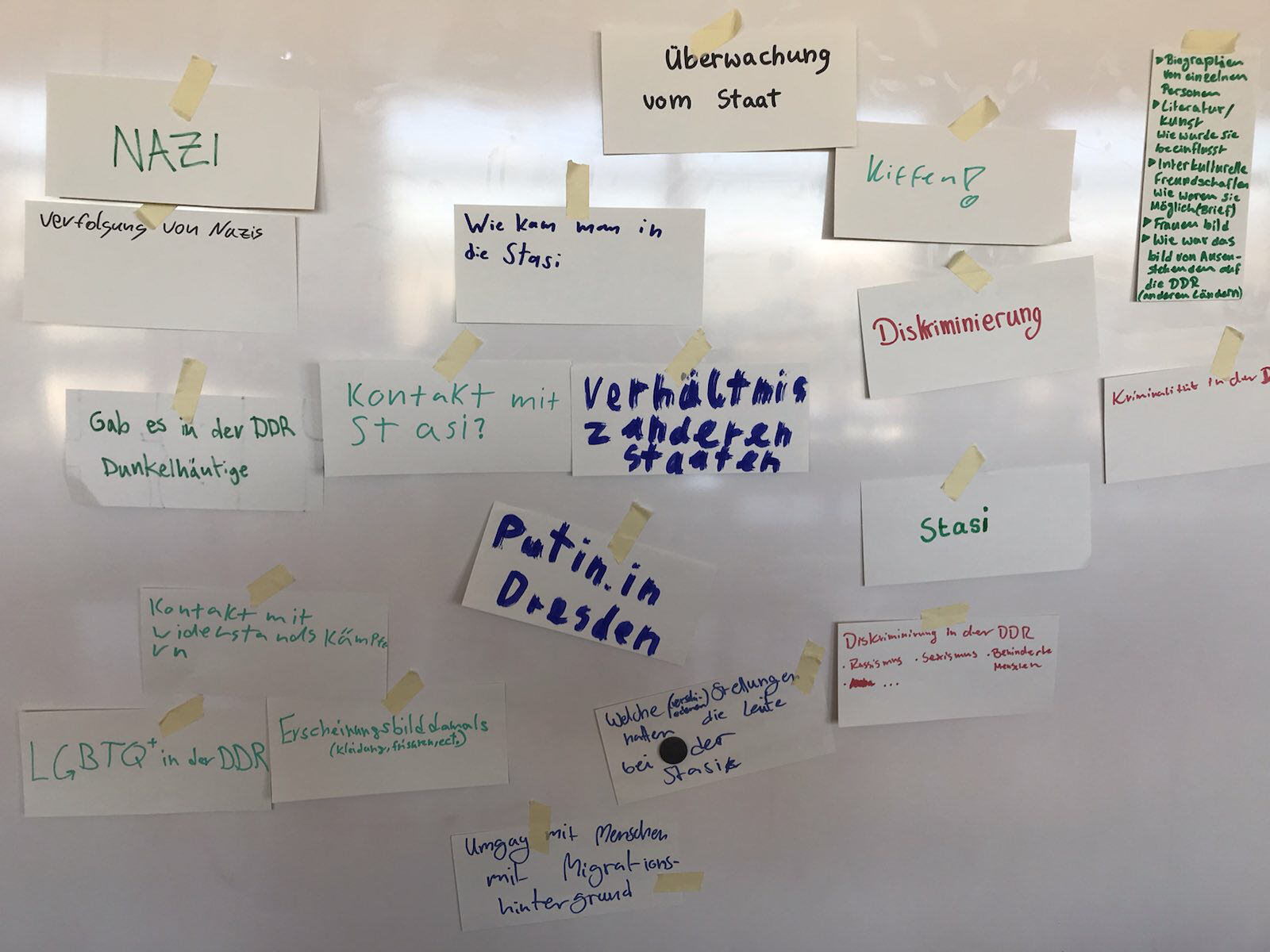 The project "zusammen.HALT" is open for further cooperation with schools and other educational partners. We would be happy to work with you to develop free historical education workshops on the history of the GDR that are tailored to the needs of your children and young people in the period from autumn 2022 to summer 2023!
If you are interested, please contact Marcus Oertel: marcus.oertel@kulturaktiv.org

In April and May 2022, we conducted our first workshops in the zusammen.HALT project using the methods of citizen journalism and role play. Together with students from the Freie Alternativschule Dresden and the Friedrich-Schiller-Gymnasium Pirna, we visited the historical sites Gedenkstätte Bautzner Straße (former Stasi prison) and Festung Königstein (former Jugendwerkhof). Likewise, we looked for historical places on the school grounds themselves or in the surrounding area. We met contemporary witnesses or people who were in intensive exchange with former contemporary witnesses. Stories from the families of the pupils themselves were also included:

26.04.-29.04. & 11.-13.05.2022 Workshop with pupils of a 9th grade from the Freie Alternativschule Dresden with excursions to the memorial Bautzner Straße in Dresden and to the Königstein Fortress, citizen journalism and role play.

23-25.05.2022 Workshop with pupils from the Friedrich-Schiller-Gymnasium Pirna with excursion to the Königstein Fortress, citizen journalism and role play.

In the workshops, the young people were able to deal creatively and playfully with questions about social cohesion in the GDR. How were young people in particular inculcated with the socialist image of man? Where were the limits of tolerance towards deviant behaviour and how was it punished? But where were there also niches and spaces of freedom? The participants themselves set their own accents, for example by suggesting contemporary witnesses with migration experience and with a queer perspective, whereupon our project team invited corresponding protagonists to contemporary witness talks and to exchange with the interested young people.

The participatory workshops used the methods of citizen journalism and role play. In citizen journalism, the participants researched stories from everyday life in the GDR under the guidance of Matthias Schumann and prepared them for the media. We will gladly use the stories and drawings in our work. In the role play, the participants developed role characters and concrete scenarios under the guidance of Sebastian Gonano and acted them out together at the end of the workshops. The potential for a role play of their own is emerging, but still needs to be developed further. The workshops were developed in advance together with the schools and the educators, and the students were introduced to the topic partly in preparation.

The project "zusammen.HALT" (Together.HALT) is sponsored by the Bautzner Straße Dresden Memorial and in cooperation with Kultur Aktiv. It is funded by the federal programme "Jugend erinnert" (Youth Remembers) for coming to terms with GDR injustice and will run until the end of 2023.